Hi everyone and welcome to this story 🙂 As you might have noticed from my previous work, I’m not usually too deep into story-telling, however I’ve found that this is the most important part of any FM project that I’m doing. If there’s a narrative – there’s drive, there’s hope and there’s focus.The project with Sparta Bucharest has been a first dive into that kind of thing, and it has been my longest and most enjoyable ever FM save. A few days ago I was struck by an idea of a Football Manager project that should tickle my vanity for the considerably long foreseeable future, however, without the story element being written out in as much detail as I see it in my mind, it would perhaps make less sense for an outside viewer. So I’ve decided to try out something new this time – it will be a project that alternates the lyrical narrative, tactical discussion and general management issues and will have a format that varies from post to post in that sense. Hope you enjoy the ride and feel free to leave a comment, a suggestion, or ask about anything that springs to mind 🙂

Hi, my name is Martin Toss, a 22 year old Swiss doctor in Renaissance studies with English citizenship, having spent half of my life in Nottingham, UK.

With inhibited self-esteem issues about my own football knowledge and an inexhaustible passion for a world that is now long gone and yet one I have dedicated my mind and heart to, I’ve reached the point where I have to make a change in my life….

Here we are… another typical, grey-clouded uninspiring day in Notts and I’m done trying to find excuses for my lack of enthusiasm about the speech I’m supposed to give in a couple of hours at the University of Nottingham ball room. I know, I know… Botticelli isn’t really anything new but it seems to give everyone a hard-on whenever there’s new research about his work. So I’m going to do my usual, academic and methodical rant in front of a crowd of pseudo know-hows and puffing overage hipsters that only have one thing in common…a false impression of their own wit. Having said that, I don’t rule myself out of those pots either, having immersed myself in Renaissance studies since I can remember having an active consciousness. And yet…20 unprofitable books later and still at the age of 22, I’m finding my passion and drive is somehow lost due to how disconnected I feel I am from that reality…where brilliant minds have wine poured over their backs in lust-filled orgies, the smell of fresh quarried stone and old paint in the enormous workshops, the constant gossip and drama of the ruling dynasties and their incestuous endeavors, the flamboyancy and flair of teenage boys trying to impress both, their masters and the fitter girls around…. ahh… if only there was a time-machine so I could teleport myself in that age, away from a place where the most exciting thing that can happen is… a Sunday roast… Oh yeah, and the Forest matches. Always playoffs and always next year…Tradition? History? Culture? Naah, p**s off, it’s just an oil-rich owner playing Fifa and throwing the fans’ hearts into all kinds of puddles. I’m done trying to believe there’s a point there either.

When it comes to football, I’m really shy about my perspective as I often seem to feel that me voicing it in the midst of a football debate would make me look like a geek with asperger’s syndrome. I’m overly analytical of everything I see in a match and I definitely don’t understand what 4-4-2 or 4-3-3 means. What I do see is patterns of role-interchange, layers of positional transitions articulated to situational play, I see space coverage and dynamics of transitions… oh, see what I mean? Yeah, I’m probably the least talkative football fan you’ll meet but there’s stuff happening in my brain when the referee blows that kick-off whistle, I assure you. I’m not going to lie, it’s tempting to take up some research-based job at a football club around here and try to slowly mold a change in my career, but… is this what I want to do? Really..? Spend all my life in this black hole of middle-England, occasionally lit up by hopeless Robin Hood stories? To be fair, the only statue of the man acts as public toilet on nights out, so if that doesn’t wrap up all there is to know about this place then I don’t know what does… And then again, do I really want to sit in my office and draft 50k pages research papers that no-one apart from a tight bunch of knit-wits seems to care about? Right! That’s that, I’m done whining, f**k the conference and them bunch of old artsy-fartsy wannabes, I’m getting a ticket to Florence! 30 quid? Yeah, I’ll take that any day. I’ll sort something out when I get there… I’m sure…

It’s 7pm and I’ve just got here, on the Piazzale Michelangelo, and this is the view that I get: 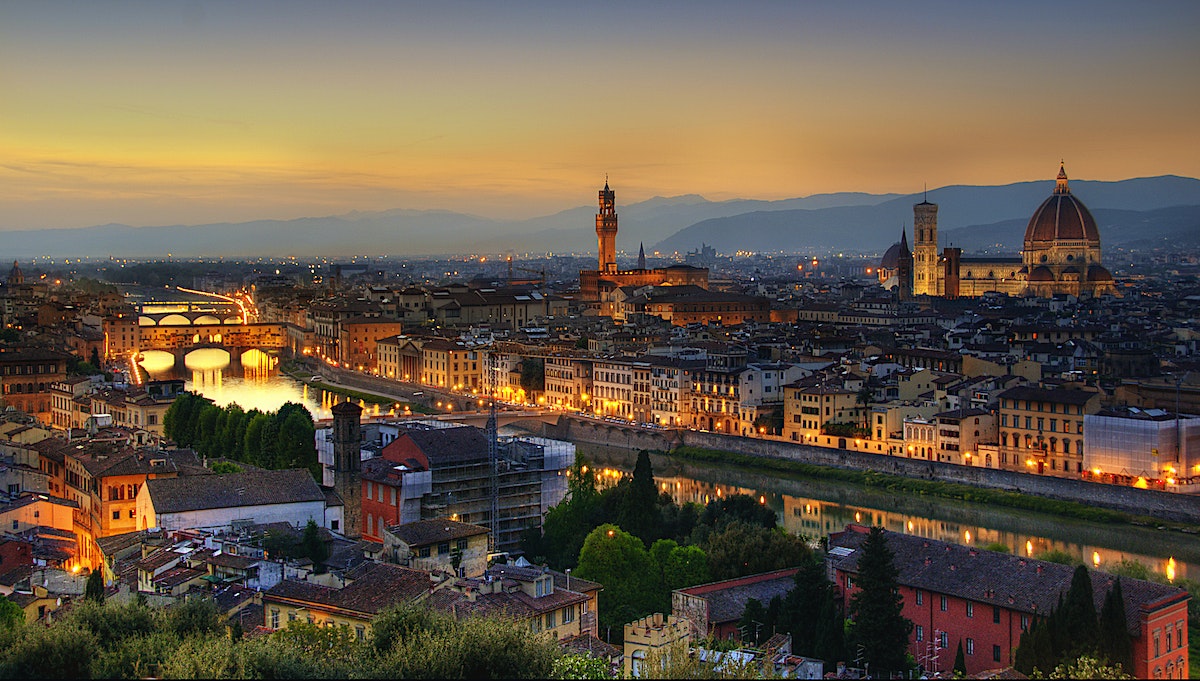 I’ve lit up a fag and just let it all sink in… My academic career forever gone to ashes and the hundreds of years of history and art that I have riddled into my mind for so many years… now standing right in front of me in spectacular fashion.. Ahh, definitely worth it! Off to my cheap motel where I’ve got a couple of nights to spend wondering and planning on what I’m doing next. One thing is for sure… I’m not going to settle for anything else than something life-changing and something that’s going to keep me here… I’m done roaming about – this is the place I’ve got my heart in, and who knows, maybe I can find out just how deconstructivist my football understanding is in some bar conversation with what seems to be a far more receptive crowd to cynical introverts like me than the one in England…

4 thoughts on “The Florentine Renaissance Deja-Vu: Part I – Prelude”