Yes, you read that right. From the last part of this series, which brushed off the final bits of the initial set-up we’re now two years ahead in Florence. And what a couple of years these have been….To sum it up, those local boys playing for us with literally no pay whatsoever, have just lifted the club from the obscurity of amateur football all the way to Serie D.

Oh yes, and there’s this as well…

None of this would have been possible without the ‘iconic’ Mariani, who I’m still not sure how we’ve managed to keep at the club after this kind of record:

Truly great stuff and my time here hasn’t been easy given the fact that it’s almost impossible to field the same starting 11 for more than two matches in a row, as everyone is on an amateur contract and 2-3 good performances usually see the player snatched away by some bigger club….hence my complete amazement at Mariani still being with us. Nevermind the fact we don’t have any coaches and we only train once a week 🙂 So yes, absolutely delighted with this feat, which I believe was in no small part thanks to the tactical approach used for these two years. As I’ve mentioned before, the short-term club strategy is to get the club to a position of stability, at least until we can keep our players under professional contracts and have a basic coaching/training infrastructure. Anything else than that simply won’t allow us to develop in the direction outlined in the club strategy, so the goal for these first few years had to be one thing only….results!

After analyzing the squad and singling out my forwards as the best players in the squad, I’ve decided settling on a 442 formation. The challenge of LLM will always be about creating a system which will produce simple but good football. What does that mean in FM terms and how do I argument that?

When it comes to issues like the complexity of the style or the simplicity of it, I really believe it to be one of the hardest views to explain. Yet, let me try: I have two notions that help differentiate things. 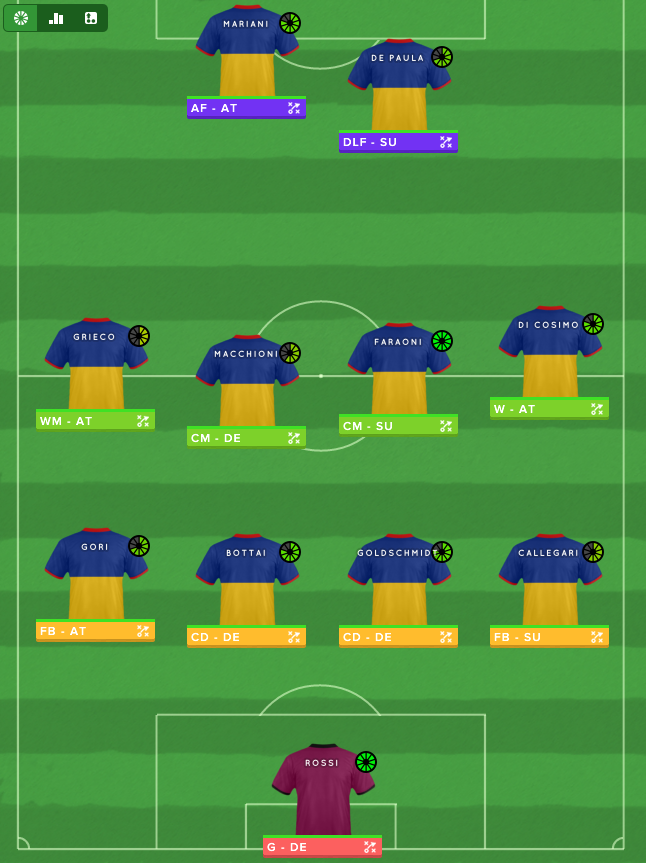 the system that I wanted to create would aim to rely on variety, as per the above definitions. I also don’t want to over-stress the focus on the practically non-existent technical and tactical ability of the team so I won’t take high risks or demand a high intensity style of football from my team . I aim to keep a good balance between, let’s say passing and crossing, dribbling and movement off the ball. what does that mean? That means I want to have my players perform a number of different yet individually simple tasks and move in a way that disrupts the balance of the opposition. After shaping up PI’s, this is the movement we achieve on the pitch: 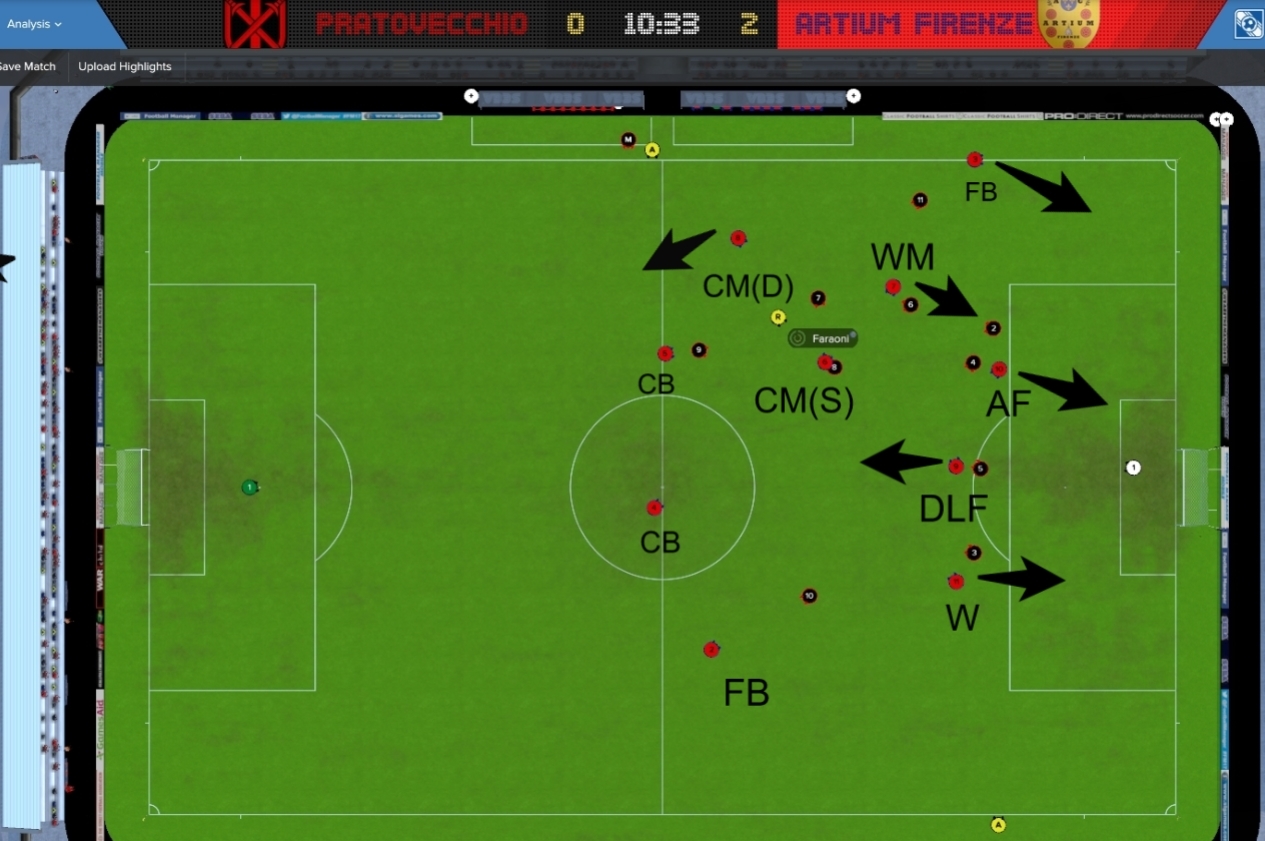 the left midfielder cutting inside, the left CM dropping deep and the left FB pushing high up the pitch helps us create that very concept of variety that I was talking about. In the final phase of the attacking transition we have the following ‘mechanism of play’:

Ideally I would have used the wing-back role on support for the left defender, but I really don’t like how it behaves under the current ME, so the closest role I could get to replicate the movement I wanted was the FB(A), which means we now have two attacking duties on the left flank. One thing I don’t like, however, is to think in such ‘labelled’ fashion. So basically, let’s look at the issue of having two attacking players on the same side of the pitch, why would that be a problem? Well, the mentality of the player defines how aggressive they are and how much risk they will take in their decisions, meaning that if you have an area of the pitch which isn’t covered by players willing to make less aggressive movement and behave more defensively responsible you risk exposing it to the opposition. So when considering the bigger picture, what are we talking about? space management. The ability of the team to cover space in a balanced way and complement each other’s movements is key to a coherent set-up. Okay, then there’s the more specific issue which relates to the role of the attacking/supporting player in the system. So, let’s see the instructions for my WM(A)

So technically, I want this player to run in behind the attacking trio formed by the AF, DLF and W and I want him to either feed through balls to them or run into space himself. Now the WM is a very defensively responsible role by default, and even with an attack duty he will track back regularly to help out in defensive situations. So, overall, we have a player on (A) duty performing…. supporting options! Especially when the overall risk (or mentality) instructions for the team are set to low (or defensive). The attacking intent of the player is reduced even further by that. Speaking about risk, I did mention I wanted a set-up that doesn’t rely too much on technical ability, quick decision-making or intelligent movement. A low risk mentality will benefit that intention in the following way:

The implications of playing on a defensive mentality can be very deceiving if only because of the name of the mentality. Taking low risk doesn’t necessarily mean defensive football. In fact, we scored a lot of lovely goals along the way which had great build-up movement and inter-play. And well… we’re the second highest scoring team in the league too 🙂

The league climbing is of course, a lot of fun, but we’re making a massive step-up from amateur football to the professional realms of the game, and that is reflected in the 135-place gap between the league rankings:

So far so good and hopefully we manage to assemble a competitive squad that gives us a chance of progressing further. Unless there will be a drastic change in the positional distribution of quality I don’t see us changing the system too much, so the toughest test of the outlined principles is yet to come 🙂

One thought on “Part IV: Back-to-back promotions and the low-risk 442”