Hello and welcome to the latest and last instalment of this series. In the previous two parts we’ve looked at what are the key traits of a fantasista and how it can be interpreted as well as translated into FM. Here are the previous two parts if you haven’t had a chance to go through them: Part One and Part Two.

To briefly sum up the essence of this project, my aim was to try and recreate a role that has perhaps faded away from the modern football vocabulary – the role of the creative forward that can defy the traditional confines of the game and offer that little bit of magic that turns the game in his side’s favour. Part one covers a few important aspects – why the fantasista isn’t the same as a ‘false nine’ or a ‘second striker’ for example, or in short… what are the traits that make up to define its’ style. In part two we’ve looked at Luan and Gremio as an experiment. We’ve covered how important it is that the overall design of the tactical set-up benefits from a fantasista and how to make the best use of his qualities.  Unfortunately all my saves from before a couple of months back vanished and I don’t have the luxury to show the screens but Luan finished as the top scorer/top assist holder in the Brazilian top division as well as holding the record for the most key passes executed in the league.

As mentioned before, there are a few ideal characteristics I would look for in a player in order to get him to play as close to a fantasista as possible and that included a few PPM’s:

Whilst the style of play/movement these would help create would definitely ease the implementation of this role into FM, I wanted to show that different types of players can perform the fantasista role differently just as much as Del Piero was a different kind of fantasista from Totti or Baggio. At the end of the day what you want him to do is … well… ‘the magic’.

Now I’ve chosen a bit of a challenge for this part. Having looked through Ajax’s roster I just couldn’t resist managing that squad full of young talent that just recently made the headlines by getting to the Europa League final. Plus… what better candidate for the ‘fantasista’ role can I possibly ask for than a young, talented and ‘open to moulding’ Kasper Dolberg? A fantastic talent, no doubt, and with bags of potential as well. His attribute spread is well rounded and offers us an interesting mix of physique & intelligence and technique. Afterall… core elements of the whole Ajax football philosophy. Still, un-impressed by his personality I brought in Didier Drogba on a free to help tutor Kasper and increase some of his mental attributes as well as change the ‘fairly sporting’ personality, which isn’t really the best you can get. The result?
Six months later, Kasper is a ‘perfectionist’ and his determination went through the roof thanks to the tutoring spell he’s had: Perhaps less great is the fact that he’s also managed to ‘inherit’ a PPM from Drogba that isn’t really what I had hoped for: runs with ball through centre. Still, this only adds to the challenge that I have set out initially – different players with different styles of play can still perform the fantasista role in their own style.
Over to the system now – I’ve recently covered a 3-2-2-2-1 with Gladbach that focused on the half-spaces and exploiting them through mobility & intelligent play. On a second glance, Ajax have the perfect squad for that system and a fantasista could add some interesting dimensions to its’s style. Now initially I used a ‘defensive forward’ for the striker role in that system – a role that hassles the opposition backline when not in possession and a pivot that holds up the ball and looks to support play when in possession. In the same line of thought, the previous task could be performed much, much better by a fantasista. As for the first… well, the complete opposite – I can’t expect a fantasista to run miles and hunt the opposition aggressively for the ball. Still, the benefit of having a much more creative role performing a task that has creativity as the main requirement could definitely outweigh the loss of ‘aggressive forward pressing’.
So here is how the set up would look like with the addition of a fantasista upfront: 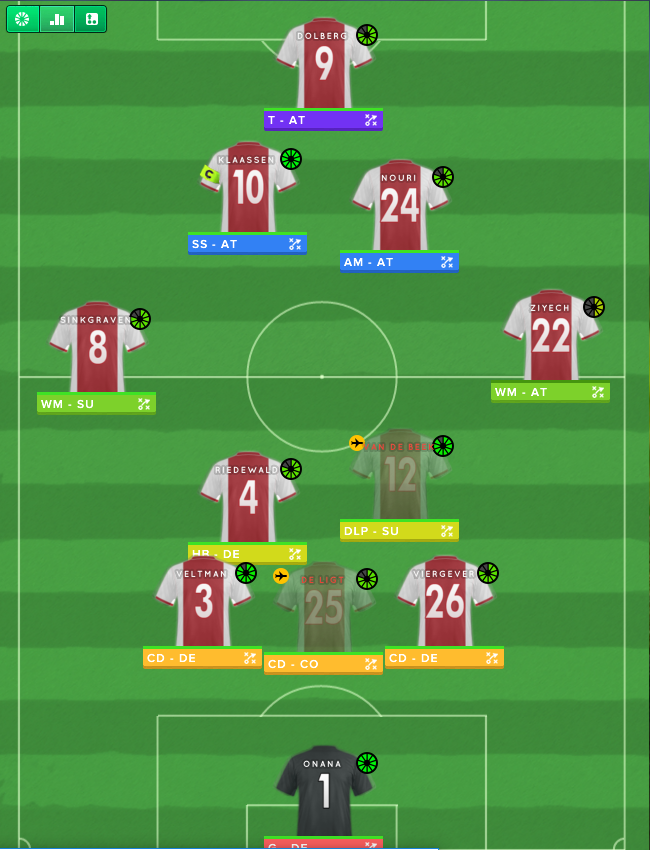 Straight away, what jumps on the eye is the number of attacking duties present in the final third. Now there are a number of ‘influential’ guides out there to help you create a tactic and most of them would classify this as illogical. Why? The legend says you need a good ratio of support/attack duties in order to have a balanced system with players that connect in their movement and technical feats. This is sound as a basic principle, however, this system shows one particular dimension that I’ve always though to be a bit of a nuanced one, or at least tough to classify as ‘fundamental truth’ or you know… ’10 things you need to do in Football Manager’ kind of thing. The connectivity of the players on the pitch isn’t always about support/attack/defend duties. What matters is how each role with its’ given instructions/duty and in conjuction with the overall instructions of the system makes him behave in relations to the others around him.
So what would that mean in our scenario? It means that the front three (Treq + SS + AM) are each performing duties that complement each other and that result in constructive/creative movement upfront with an increased level of urgency. Part of the reason why I chose all of the roles on attack duty is because the very formation we employ guarantees a high number of bodies in the midfield strata, which already helps us maintain good pressure on the opposition for winning back possession as well as the numbers to circulate and retain the ball in midfield.
Same would go for the defensive side of our style: the most problematic area we can face (the wing) is well covered by the pressing triangles formed by the side CB’s, one of the DM’s and the respective WM on the same side of the pitch. For more detail, have a look at the above link on the Gladbach System, where I explain the ins and outs of the system in more detail. Finally, the only aspect of our style that could be problematic would be not having enough incisive intent in the final third.
Hence three attack duties, which however support each other well and perform different tasks that ensure good connectivity and interplay: A shadow striker that gives us aggression, verticality and that very incisiveness in the final third, an attacking midfielder that acts as an offensive playmaker whilst also having a fair share of defensive responsibility and an important positional pivot for maintaining possession, and finally the fantasista: moving into channels horizontally and vertically in front of these two, dropping deep to help in possession, one-twos, a killer ball, a diagonal pass… everything you could possibly want from a fantasista. In order to make sure the player does what is best for the system, here is how I instructed Dolberg to play:

Essentially he becomes a different kind of pivot by holding up the ball, a task that is very suited to him due to his good physical stats (balance + strength). So, here is the typical scenario when the team performs attacking transitions: Here is an example of how the fantasista helps us create space for the other attacking options in the team: the play is focused on the right wing in this very instance, with our RWM looking to initiate an attack from the wing. Whilst the situation unfolds, our fantasista drags with him four opposition players, as he is the only striker we have, as well as our primary creator – so definitely danger no.1 for the opposition. This in turn, leaves our shadow striker with an incredible amount of space to receive the ball, assess the situation and take a decision. Here is an example of how the player assesses the best position to adopt when building from the back: as you can see, he left the initially central position in order to drift all the way to the wing, as Veltman (our CB) has the ball and is looking to build from the back. Dolberg drifts all the way to the touchline, which gives Veltman a free passing lane to find him, whilst maintaining the possibility of supporting the four attacking options he would have ahead of him once he would receive the ball: 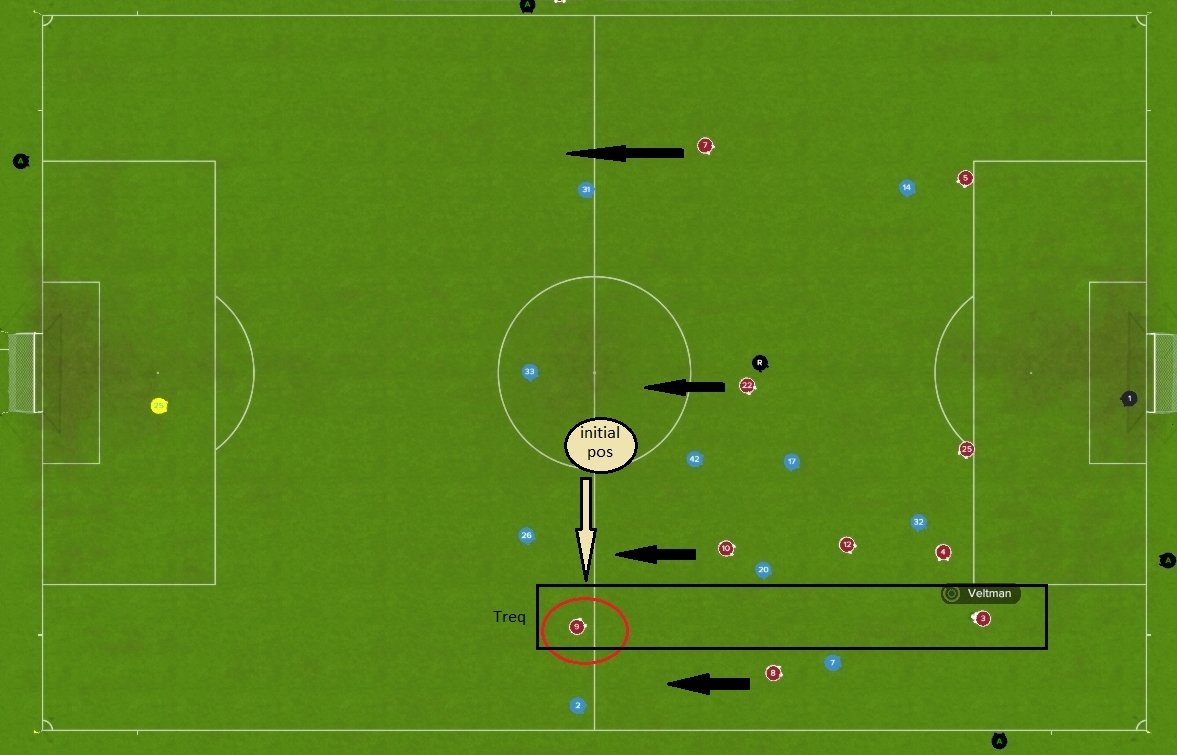 Finally, the way that the Trequartista always move around into ‘pockets of space’, looking to stamp his mark on the game make him perfect for the style of play I am (was) trying to achieve in this system. As mentioned before, it’s quite the mistake to start building a system for the sake of one player or trying to chop and change too much just to make sure you can exploit a specific player. The ideal situation is when the role/qualities of the player and the objective of the system are mutually beneficial. So for a system that seeks to exploit the half-spaces with intelligent movement and creativity as well as have enough attacking dent in the final third, the way Dolberg interprets the role make him a perfect fit for us. As for his ‘fantasista’ responsibilities….

We finished our first season as champions and Kasper topped both the goalscoring and the assist charts in the league. He also holds the highest rating for key passes in the league:

I couldn’t resist playing this save further due to how invested I became in developing Ajax’s youngsters as well as seeing Kasper develop further. Four years later, Kasper’s Ajax career looks like this:

Already a club legend, alongst the likes of Cruijff and Van Basten, he helped us win three consecutive Champions League titles (2018, 19, 20) and absolutely rocked the Eredivisie in each and every season, perhaps with a slight drop in form in the last, for which he was injured 6 months. With 93 goals and 43 assists in 105 league appearances to date, I believe we’ve successfully converted King Dolberg into an effective fantasista of the modern game. I might consider doing a write-up on this Ajax save due to how well we’ve managed to develop the youngsters there, but that remains to be seen.
For now, and on a conclusive note, I believe both this and the previous part show that the fantasista can be of various profiles and can perform various duties in different systems. Apart from assigning the player to the role of a ‘trequartista’ one needs to make sure that makes sense in the design of the tactical system and that the fantasista can offer as much support to his team-mates as he receives it by them. Inter-connectivity and correct distribution of responsibility can make the fantasista a fearsome outlet of goals, assists, key passes and well… creativity.