What is perhaps one of the most fascinating aspects of football culture is the different interpretations of player roles and playing styles that various nations bring on to the wider football scene.

The global football discourse often involves specific, almost trademark terms like the ‘Volante’ in Brasil – a term that has its roots in the name of Argentine player Carlos Volante, who was one of the first to play the position during the 1930s. It literally translates into English as Flywheel – a rotating device used as an energy store – or steering wheel. They are very much the fulcrum of attacks and the engine room of defence, and will use their technical ability to engineer attacks whilst also being able to garner the energy to break up opposition moves.

Then you have roles like the ‘Raumdeuter’ in Germany, based on Thomas Muller‘s style of play at Bayern Munchen – a term that means ‘space investigator’ when translated literally and provides a good account of the style of play it often employs.

When it comes to Italy, however, someone accustomed to the English football terminology would probably need a dictionary to make sense of pretty much anything they’re talking about. Italian football culture is deep-rooted in history and has often been described as the nation that focuses most on the tactical side of the game. The trouble is, there are different words for similar things, however….not quite similar. For example, a ‘mezz’alla’ would be regarded as the equivalent of the ‘box-to-box’ midfielder in the UK, however that isn’t necessarily true: the mezz’ala role entails more horizontal movement rather than vertical, box-to-box coverage, and its’ literal translation actually means ‘half-wing’, which relates to the player operating in the ‘half-spaces’ and covering the wings (mostly relevant in 3-man midfield systems, such as the 4-3-3 or 5-3-2).

This is of great importance when trying to make sense of specific football terminology. As mentioned above, a lot of these ‘trademark’ roles entail definitions of specific players and how they interpret the roles, as well as the context of the football culture they are part of. Along with the ‘regista’, One of the Italian terms that gained a wider recognition in world football as well as in English football culture is… ‘the tequartista’. Literally translated as ‘three quarters player’, the term refers to where the player would likely play on the pitch

As Roberto Mancini points out in his Master’s Thesis that is based solely on analyzing the trequartista, “The magic of the number 10 comes from the trequartista‘s feet, the player of inventiveness, the one who is capable of wrong-footing “everyone with a piece of skill perhaps he is not even fully aware of.”

He also breaks down his definition of the ‘trequartista’ into two aspects, which highlight the importance of football culture and the context it creates:

From the point of view of “football culture”:

The trequartista is a player with great technical skills and specific characteristics:

From the point of view of the “position on the field”:

The trequartista is a player who places himself in the central zone between the defensive midfielders and the strikers’ lines.

His analysis covers a lot of aspects about this role, and I strongly recommend giving it a read here – Roberto Mancini Master Thesis. Perhaps the most relevant part of his research to the objective of this article however, is his observations on how the ‘trequartistas’ of Serie A (in year 2000) show very different styles of play, and how much of it is down to the player’s particular characteristics and how he interprets the role. For example, you’d have a player like Juan Sebastian Veron, who drives forward from the deeper area of the pitch, or someone like Locatelli (Bologna 2000) who mainly drifts laterally behind the strikers.

The tactical set-up, the player’s personal style of play and his general characteristics can result in a variety of interpretations of what is a ‘trequartista’. In fact, so different where the styles of football that different trequartistas employed, that a new term was coined out in order to refer to a particular type of player that derives from the more traditional interpretation of a trequartista:

The Fantasista, as the name itself suggests, is a role that implies artistry with and without the ball. Sparks of magic that vow the crowds, an imaginative ability to think about football and the technical ability required to execute it. The fantasista has traditionally been the main star of the show when it comes to exciting, creative pieces of play. Some of the names that made the role famous are undoubtedly – Roberto Baggio(pictured above), Diego Maradona, Francesco Totti, Alessandro Del Piero, amongst many others. 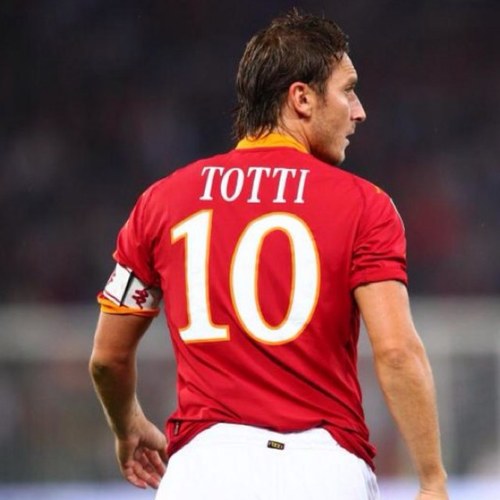 Just to illustrate how mind-twisting Italian football terminology can be, I will quote the author of this fantastic piece.

“Fantasista is usually or mostly a trequartista, but trequartista is not always a fantasista. Simone Perrotta, Thiago Motta, are one of the players who have been put as a trequartista but not fantasista. They interpret trequartista as hard working attacking midfielder who spread the pass and shoot at the goal when the opportunity knocks out.

In Italy, fantasista is being described as the one who wears no 10, in which every little italian kids dream to wear no 10.”

What differentiates him from the traditional trequartista is a combination of:

a) tactical intelligence – the ability to read the game, position himself favourably, make decisions that unlock stale pieces of play, trick the opposition, anticipate the opponent’s collective/individual moves

c) technical ability – the ability to execute the combination of the above two points with the feet: ball control, dribbling, technique, first touch and so on.

Roberto Baggio is truly one of the first players that helped bring even more weight to what a ‘fantasista’ means:

In a nutshell, we are talking about a football player with complete abilities in the attacking/creative department of the game. With less focus on physique and with limited defensive responsibility, the fantasista conserves his energy and focus on creating play in the final third, or more appropriately… in the third quarter. Unlike the trequartista, however, he will look to get involved even more in the box and be there to apply the final finish or curl the ball into the top corner, as a certain man did on numerous occasions only to get that finish trademarked as the shot ‘a la Del Piero’.

I hope you all enjoyed this intro as much as I did writing it 🙂 In the next part of this series I will look at how this role can be translated into Football Manager and how different players or tactical systems can result in interpreting it differently.

3 thoughts on “The Fantasista: Intelligence, Creativity, Technique – Part One”