This is a first guest appearance from Oliver Jensen, a.k.a fmfutbolmanager. Oliver has an excellent eye for analysis and a methodical approach to complement his tactical know-how. Follow him on twitter @fmfutbolmanager or find him on Slack/SI forums under the same nickname.

Welcome to my first post on FM Asymmetric. I want to write about the simplicity of football and how I implement my tactical approach in Football Manager. As the great man Tony Adams once said, you just have to keep the ball out of one end, and stick it in the other.

Some might have read my thread on the SI forums regarding my AEK save and the tactics I employ. This is an adaptation of that. My system has changed, but the underlying philosophy is the same.

The basic premise for the type of football I want to play is predicated on controlling possession of the ball, creating space in advanced areas to exploit, and above all else, being patient and methodical in our approach so that we do not aimlessly give away possession of the ball. I am not talking about the Louis van Gaal approach of holding possession for the sake of having the ball, that is torturous football, our possession needs to lead to a positive action. But not being afraid to circulate the ball and regroup if no positive action is immediately forthcoming.

So, how do I put that into practice?

Control possession of the ball. The solution:

Creating space in advanced areas of the pitch to exploit. The solution:

Being patient and methodical in our approach. The solution:

To achieve the aforementioned playing style, our tactical instructions look like this. 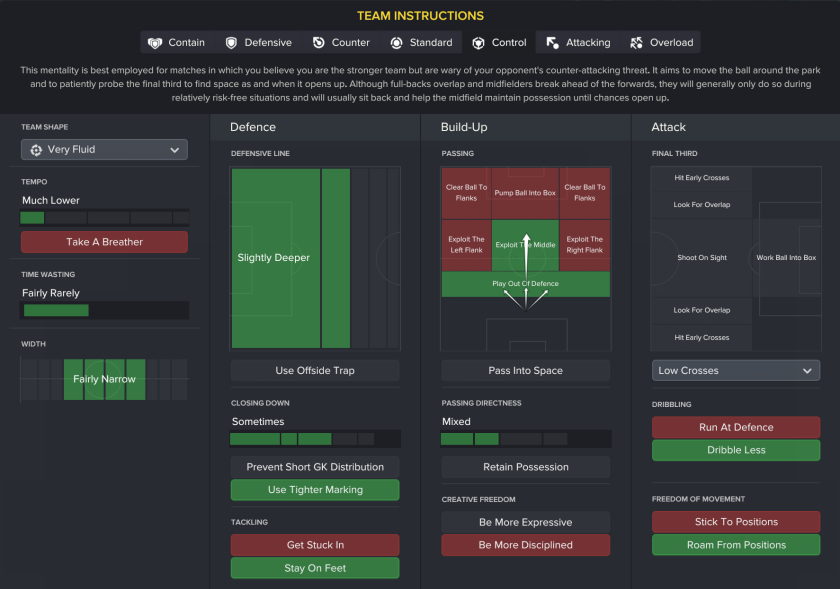 The formation, player roles and duties

In terms of our formation, we line up in a 4-3-3-0 strikerless system. The formation is just a basic construct, and not really essential to what we are trying to achieve. It is the roles and instructions given to the team and players that define our system. These ensure we are supporting the ball when in possession, and have sufficient positional cover for when we are out of possession.

The crux of our shape is the deep pentagonal centre, formed of two Central Defenders, two central Ball Winning Midfielders and a Roaming Playmaker, through whom most of our play will originate. This is where the majority of our possession is held, with the supporting central attacking midfielder dropping to assist. Having these natural triangles when designing the system will lead the players to form triangles in possession. 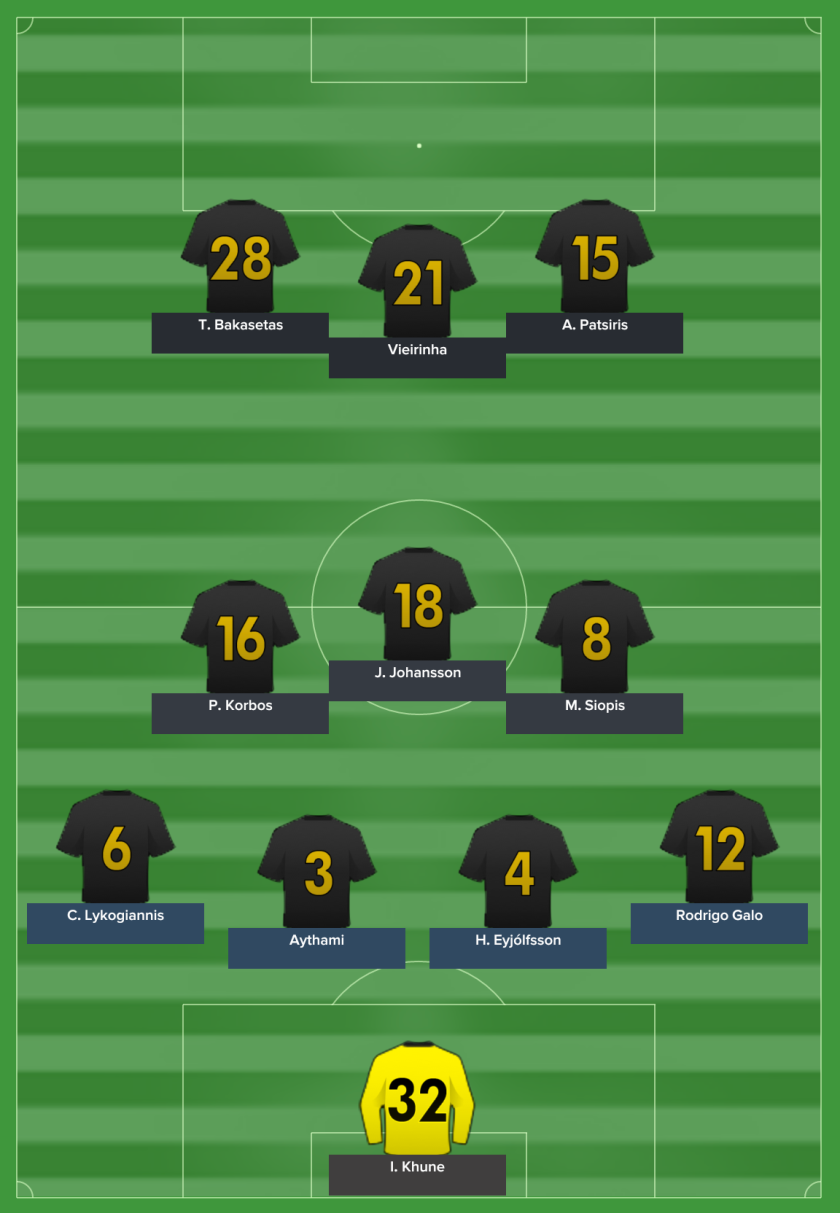 In terms of the player roles and my expectations of them, here’s a little more detail.

A supporting Sweeper Keeper sits at the base of the system. He is our first line of attack and plays an important role in building from the back. Excellent passing and throwing attributes help keep possession with us. He is instructed to distribute quickly and to the central defenders. Additionally, he gives us an extra passing option at the back.

Two covering Central Defenders are there to sit back and attack anything that penetrates our midfield. They’re asked to mark tightly and tackle harder.

Two supporting Wing-Backs flank the covering central defenders. These players are given the most instructions of all the players as I want them performing a very specific role for me. I instruct them to mark tighter, close down much more, and tackle harder. They’re also asked to stay wider to give us the width to stretch play and open up spaces in the defence. Finally, I ask to cross to the near post.

Two defensive Ball Winning Midfielders sit in the centre of the pitch. Their job is to drop deep and chase down anything that comes near them. Our fluidity means they also move to wider areas to support the Wing-Backs in closing down anything on the flanks.

At the top of the pentagon is my Roaming Playmaker. He is the spearhead for our attacks. Our central defenders and midfielders look for him when regaining possession and he is in control of the transition and decides whether to move the ball out wide or proceed through the middle. Strong both defensively and offensively.

Our front three consists of two Shadow Strikers flanking a Trequartista. My Trequartista is the attacking pivot (if you think of the Roaming Playmaker of being the defensive pivot), who offers a creative outlet further afield. The Shadow Strikers are there to offer the furthest options for through-balls and ultimately, goals.

Now, how does all this look on the pitch?

Analysis of our defensive play

Defensively we keep things very simple. At the top of the pentagon, the players push the opposition player on the ball out wide. The central defenders stay deep. The wing-backs attack anything that moves out wide. When the ball moves wide the ball winning midfielder on that side covers with the roaming playmaker.

As we sit back deep, we’re happy to let the opposition have the ball in and around the half way line, as it moves towards us it is shifted out wide by our positioning. Notwithstanding the way the game mechanics may or may not overpower full-backs and crosses, this is where you can really push the opposition into making a mistake, essentially using the touchline as an additional blocker. [Select the left image for a larger view]

Overloading the attacks as they come down the wings is a simple and effective tool for quickly winning back possession and springing counter attacks. In this example, the ball shifts from right to left but is easily intercepted by our wing-back to prevent another attack.

In the final example, Napoli had the ball in the central area again, our pentagonal shape gives them options out wide, but nothing much through the middle. [Select the left image for a larger view] 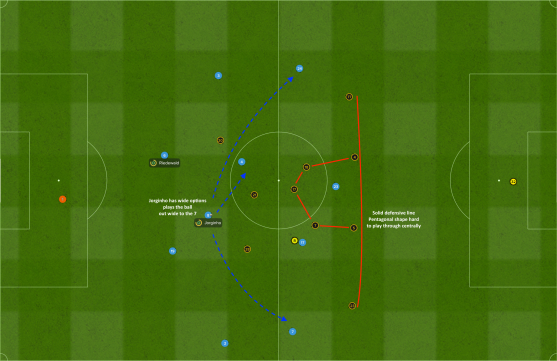 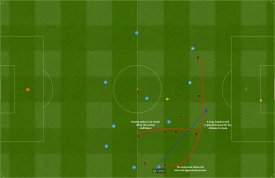 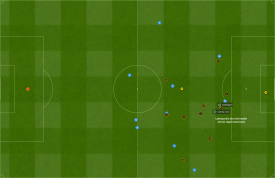 Analysis of our attacking play

When attacking, we transition quickly from the defensive phase. Breaking at a fast pace to disrupt the opposition whilst they’re out of position and not yet in their defensive shape. When the opposition is out of position, there is always space to exploit. If you have quick and explosive players, with good decision making and with good off the ball and anticipation you can take advantage of that. [Select the left image for a larger view]

As you can see from the scenario, the back three of Napoli are wide apart and the midfield is positioned more advanced than our attacking midfielders. When the ball is launched forwards from my wing-back a quick counter results in a really nice goal. My wing-backs are instructed to play more risky passes, and in this case, it pays off with a pass across the middle of the park.

The diagonal pass into the forwards breaks the horizontal and vertical lines within Napoli’s defensive shape. Taking advantage of the wide defence and high line when Napoli attack was key to our 4-1 victory over them in the Champions League. Constantly breaking these lines with our running and use of the ball created disruption and space.

In the scenario below we again win the ball deep, launch it up to our attacking three, who have good decision making, vision and passing ability which helps to move the ball quickly into dangerous areas. Again breaking both horizontal and vertical lines, we are able to exploit the spaces left by Napoli. [Select the left image for a larger view] 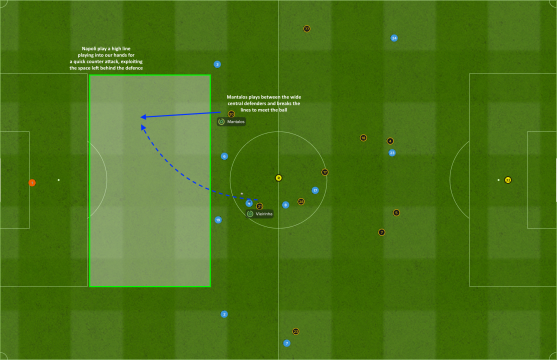 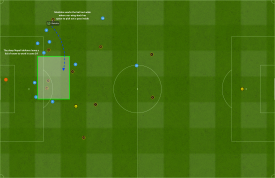 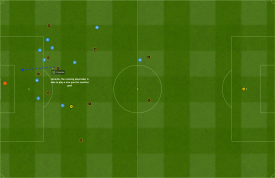 Although in the above scenario Napoli got back to defend, we were able to work the ball out wide and recycle possession. By virtue of the shadow strikers inclination to move into channels, the defence lose their shape marking him. This opens up space for our playmaker to receive the ball in zone 14 for another goal for our trequartista, provided by a nice through-ball.

In this final scenario, we demonstrate our positional play. Using possession as a tool, rather than a philosophy, we are able to move the opponent out of position to free up the third man in dangerous and exploitable areas. Typically this will be our trequartista, as he is free to roam between the opposition central defenders whilst they’re occupied with the shadow strikers moving into the channels. Moving the ball quickly out wide and back into the central areas again, we free up midfielders to pick out simple passes. [Select the left image for a larger view] 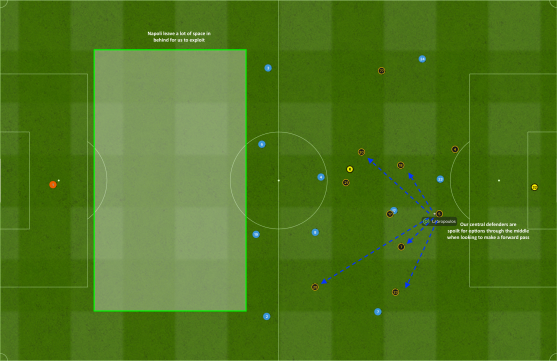 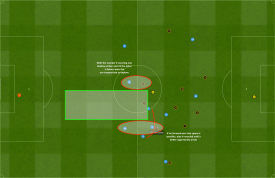 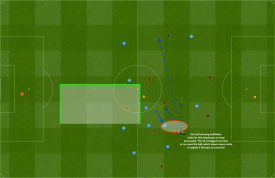 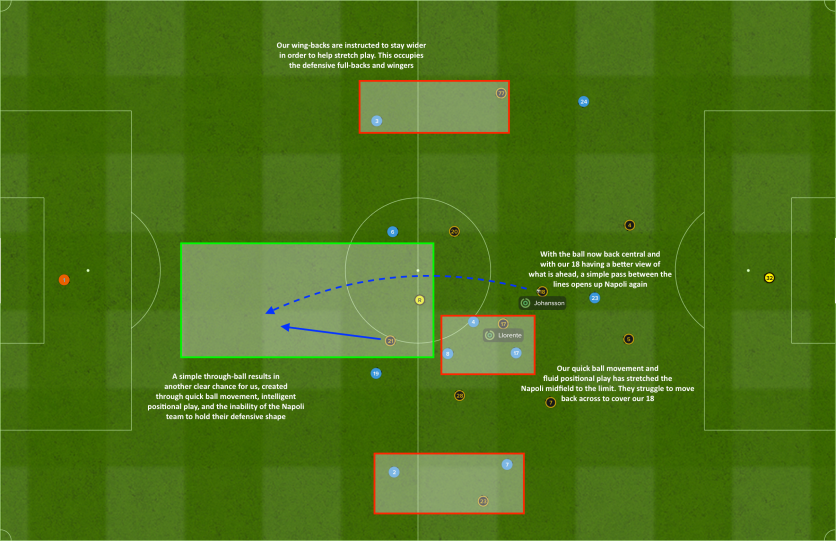 To summarise, we had our best season yet with this system. We won the league with only one loss and got through the group stages of the champions league. Defensively, I’m very happy with how the system is performing. Offensively we’re creating a lot of chances through the middle, and breaking the lines with pace, which in turn causes disruption to the opposition organisation which naturally leads to space to exploit.

I will close out this post with some statistics from the league. We have almost double the number of passes of any other team in the league, with superior passing accuracy. And probably more importantly, we’re by far the best at hitting the target with our shots due to the number of quality chances we create through the middle. [Select the top image for a larger view]

You can read more about my save over on the SI Forums, or visit my channel on the FM Slack, -fmfutbolmanager

Thank you for reading.

Oliver Jensen is a fictional Football Manager from Kristiansund, Norway. He is currently the manager of French Ligue 1 club Stade Rennais. View all posts by Oliver Jensen